In my article for Film Literature Quarterly, I compare Stanley Kubrick's Lolita (1962) to Vladimir Nabokov's original 1955 novel. I argue that the film is not a weak copy of a famous novel but introduces Lolita through its own palimpsest of virtuoso parodic turns. I believe, therefore, that there is a conscious and clever humor in the way that Lolita does not mimic Nabokov but instead departs significantly from both the novel's description of events and Nabokov's own screenplay. Indeed, it is my belief that the film introduces original material at its very outset in order to indicate Lolita's new visual perimeters; we are not mining a page for an author's clever puns but are instead invited to see the funny face of film.

I particularly liked writing this article. It was the first time I could show how film parodies topical aesthetic debates. At the time of the film's making, I note that Ernest H. Gombrich's Art and Illusion was published five years earlier. In this work, Gombrich refuted the traditional separation between nature and convention, painting and words, and literally used the "ping" or the "pong" of a given object to explain synesthetic equivalence. Gombrich writes:

"It was Professor Roman Jakobson who drew my attention to the fact that synesthesia concerns relationships...I have tried out this suggestion in a party game. It consists of creating the simplest imaginable medium in which relationships can still be expressed, a language of two words only-let us call them "ping" and "pong." If these were all we had and we had to name an elephant and a cat, which would be ping and which pong? I think the answer is clear. Or hot soup and ice-cream. To me, at least, ice-cream is ping and hot soup pong. Or Rembrandt and Watteau? Surely in that case Rembrandt would be pong and Watteau ping. I do not maintain that it always works, that two blocks are sufficient to categorize all relationships. We find people differing about day and night and male and female, but perhaps these different answers could be reduced to unanimity if that question were differently framed: pretty girls are ping and matrons pong; it may depend on which aspect of womanhood the person has in mind, just as the motherly, enveloping aspect of night is pong, but its sharp, cold, and menacing physiognomy may be ping to some."

In the film, and in a 'party' setting recalling Gombrich above, Quilty states:

'Let's have a game, a little lovely game of Roman ping pong like two civilized Senators:' Hitting a ball across the table to an immobile, staring Humbert, Quilty continues: 'Roman ping ... you're supposed to say Roman pong ... OK you serve, I don't mind, I just don't mind ... Come on ... I bet you didn't know I had that ... Roman ping pong.'

The second aspect of the film that I enjoy is the fact that in the final moments of Quilty's death, on the minute or so that he takes to drag himself, wounded, behind a painting, we are focusing on George Romney's painting, Portrait of Mrs. Bryan Cooke (1787). As the first author to identify that it is this painting used by Kubrick in the film, I am also the first to reflect on the way that this conclusion collapses the story of Lolita into a clever visual pun; Kubrick has indeed shot the picture of a young lady.

As I argue, even in the "new era of writing about Romney"-an era inaugurated with the National Portrait Gallery in London, the Walker Art Gallery in Liverpool, and the Huntington Library in California coming together to sponsor the George Romney 1734-1802 exhibition in 2002 -Romney's portrait has received no scholarly attention. We are still looking at a portrait of an unknown woman. What we might appreciate, however, is the information we can glean about the artist himself. Returned by scholars such as Alex Kidson to the mainstream of British art history, we now know that Romney was London's most fashionable portraitist in the 1770s and 1780s, that he drew patronage from a burgeoning group of class-conscious consumers, that he was never a member of the Royal Academy and essentially remained out of public sight, and that he is harder to categorize than his two illustrious contemporaries, Reynolds and Gainsborough, precisely because he was unsociable, reclusive, inarticulate, and secretive.

In referencing an artist who was not only little known in the 1960s but who was also famously secretive, the film seems to be parodying Nabokov's own literary obtuseness. It also plays Nabokov at his own pictorial game. 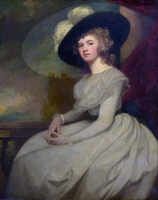 What are these puns? Well, Mrs. Bryan Cooke is, like Lolita who reappears as Mrs. Richard F. Schiller, a newly married woman who has adopted the name of her husband. She might be young and very attractive, but (as with Kubrick's Lolita) the picture tells us that she is also married and unavailable. The two women are also visually very similar. In both, a fair-haired young lady sits alone and directly returns our gaze from beneath the wide rim of a hat. The whiteness of the dress and skin in the Romney portrait indicate to us that his sitter is simple and pure; these same sentiments are parodied when we first see Kubrick's fair Lolita looking out at us from beneath a white fur hat.

Finally, the Romney portrait that we see punctured by Humbert's gun is not just being shot; it is also evidently a copy of the original, a fake. We are therefore returned to the idea that film is always already a reproduction, an art form that exists without an original.